Every town needs a great bike shop and Hebden Bridge is no different. Blazing Saddles is an award winning shop packed with all manner of bikes, clothing and accessories to get you out on two wheels but it’s the knowledge and character that is packed into the shop that makes it something special.

We got owner John Ainscough to down tools, grab a brew and tells us more about himself and his shop.

“My first bike was a women’s bike, a blue women’s step through bike. My mum got it for me as she was a keen cyclist. She used to do time-trials, I think she won a 12 hour endurance medal, so she was pretty good. But when she got married and had kids that was it for her, there was no more riding for my mum.

After that I got a bike that came in bits, that was a drop-handlebar bike that one. It was a racer of some kind. Steel frame, three speed hub in the back – stuck in third gear everywhere. I remember taking it apart on the kitchen table to try and fix it. It went back together again, it didn’t work, but it went back together again! What was amazing was where I could go and what I could do on it. There’s a street near where I used to live and it’s really steep, I used to be able to get up there on it. I was fit, or I thought I was! 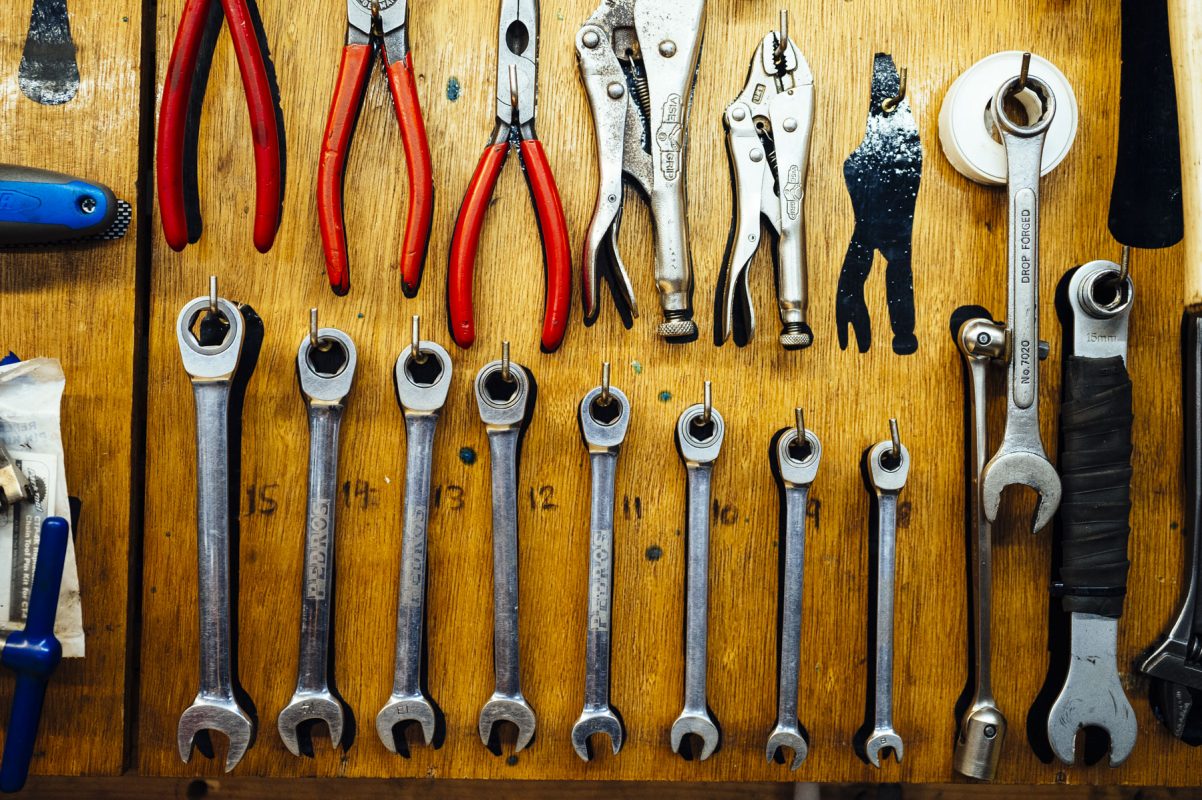 And then I got another bike, the third bike I had. That was a beautiful bike that, I think it was a BSA frame. 26 inch wheel, 26 inch and 3/8’s or something like that. It had a curved top tube and me and my brother rubbed it all down, sprayed it up and got some bits for it. We got a big, fat, comfy saddle on it and the widest bars and the most knobbly tyres we could find. There’s a photo of it on the Blazing Saddles website with me trying to pull a wheelie on it. It’s embarrassing as hell is that picture, I cringe when I look at it. I couldn’t do wheelies, I still can’t. I guess that was a mountain bike before mountain biking. I’d be about 14 in that photo. I’m 54 now. That’s 40 years ago, bloody hell. Anyway, that bike got nicked and I didn’t touch a bike again for about 15 years. 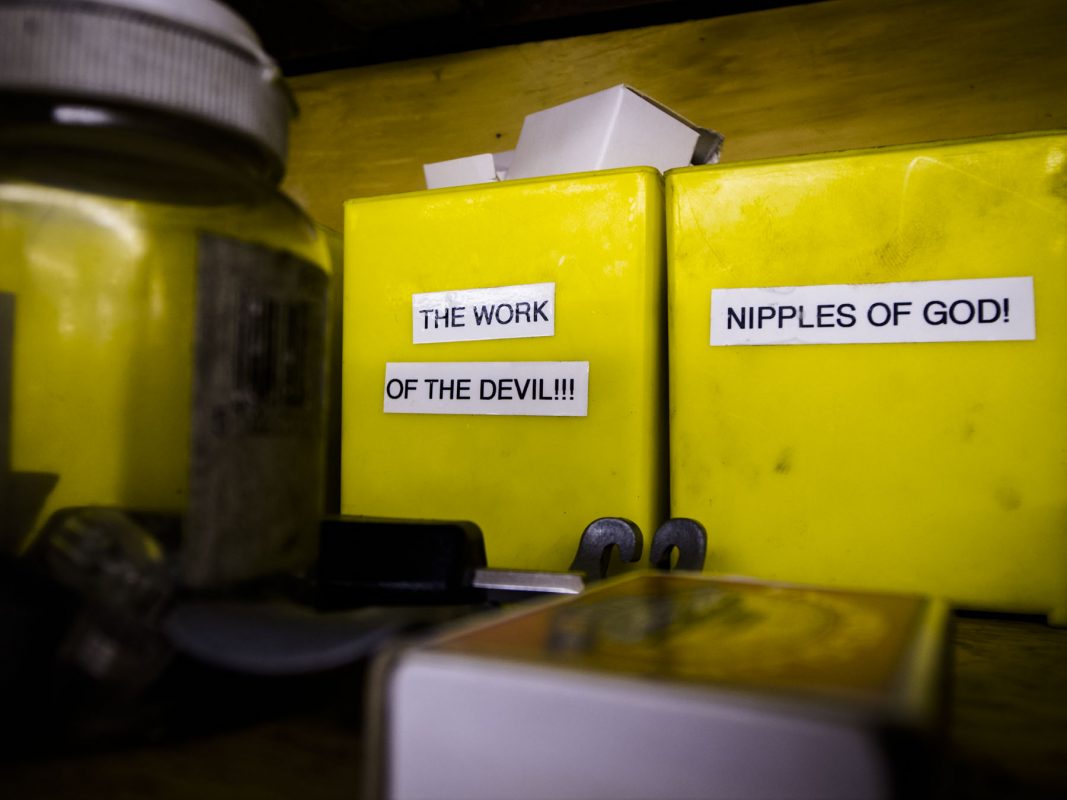 Then, when I was 30 I wanted to get something a bit more active going on. Getting outside was the key I think. I’d seen this mountain biking thing and I thought “Hmm, it might be good fun that.” So I went through adverts looking for a secondhand bike and ended up with a Saracen Tufftrax. Steel frame, powdercoat blue, beautiful bends… Nice bike. I had loads of fun on it, loads and loads of fun. I had this little loop that I was doing and I could see myself getting better and better and thought “Oh, I’m getting fitter. I don’t need to stop at this gate anymore, I can ride past it”. No friends, I just rode on my own. Even now I quite often ride on my own, I ride with people too but I’m quite happy riding on my own at my own speed, doing what I want, wherever I like.

At that point I was working for the sewerage works, travelling around the country subcontracting. The money was great but I had a young family at the time and I wasn’t happy about staying away all the time. There’s more to life than just money so I had to think of some sort of alternative, and I thought “What can I do?” 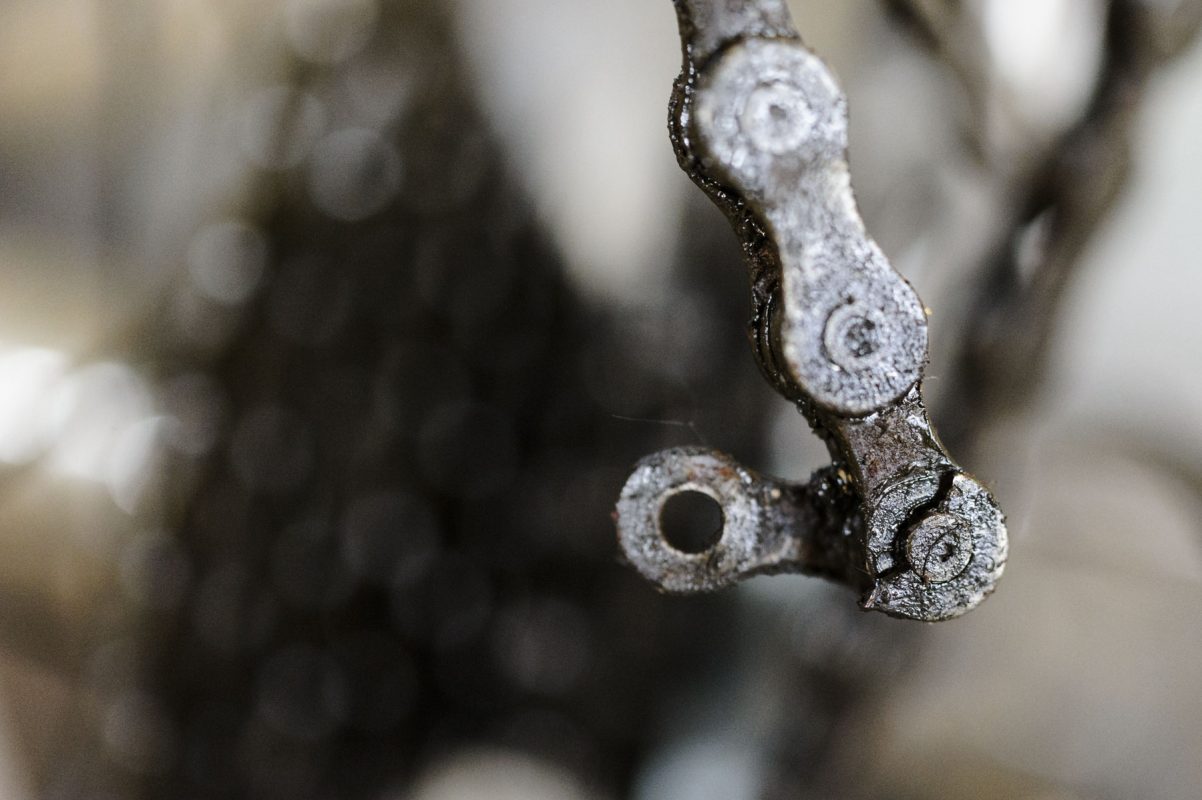 I was living in Barrowford at the time and I’d been to a few bike shops locally to get bits that were wearing out on me old Saracen. I got some duff advice here and there. I wanted to get new chainrings on it. I went to one guy and he said “Oh, you can’t get rings for these, you have to buy a new chainset.” I was a bit green so I bought a new chainset. But later I thought “I didn’t need to buy a new chainset, I could just replace just the rings.” So it got me thinking, “Are they giving good advice? Are they selling the things people need and want?”

I was on the dole for a bit and there was a great scheme called the Enterprise Allowance Scheme. You put in a grand and after that you’d get £40 a week back and a load of training. I went to this little club with all sorts of people there setting up as decorators and builders – all sorts of young businesses wanting help with starting up. There were specialists in different areas, accountants, marketing folk, various people who were experts in different fields and could help give you a real solid footing. Part of the training had me going onto the street with a clipboard, waving down cyclists and asking if they’d use a bike shop in Barrowford. The answer was yes so that’s what I did, I opened Blazing Saddles. Some of those cyclists are still customers now! 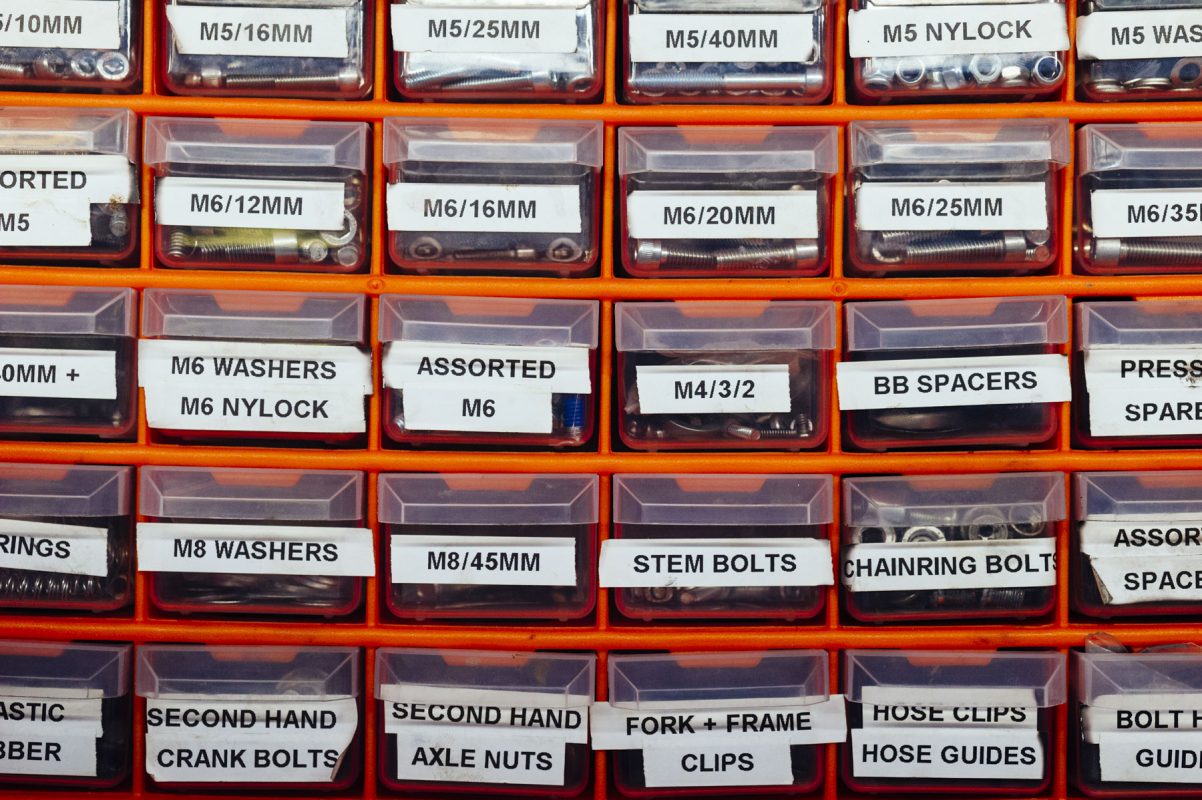 I was there for about 10 years, thereabouts. After eight or nine years I was looking for somewhere a bit bigger on the high street, as I was down a little side street, but I couldn’t find anywhere in Barrowford. I used to do a fair bit of riding in Hebden Bridge some 23 years ago and I loved it, there’s such a great network of trails around the town. Different riding to round Barrowford, probably better.

There used to be a bike shop in Hebden Bridge around that time. I discovered the owner was selling up as he couldn’t make a bike shop work. I thought “Strange, how can you not make a bike shop work in Hebden Bridge?” A shop came up for rent on Market Street in Hebden Bridge and we moved into that. We rented that for a good few years, and branched out over the road into the workshop. We sold products we believed in and gave advice that you could trust, and we still do! The place we’re in now in West End came up for sale and we thought we’d rather buy than carry on renting so we moved, but not far. 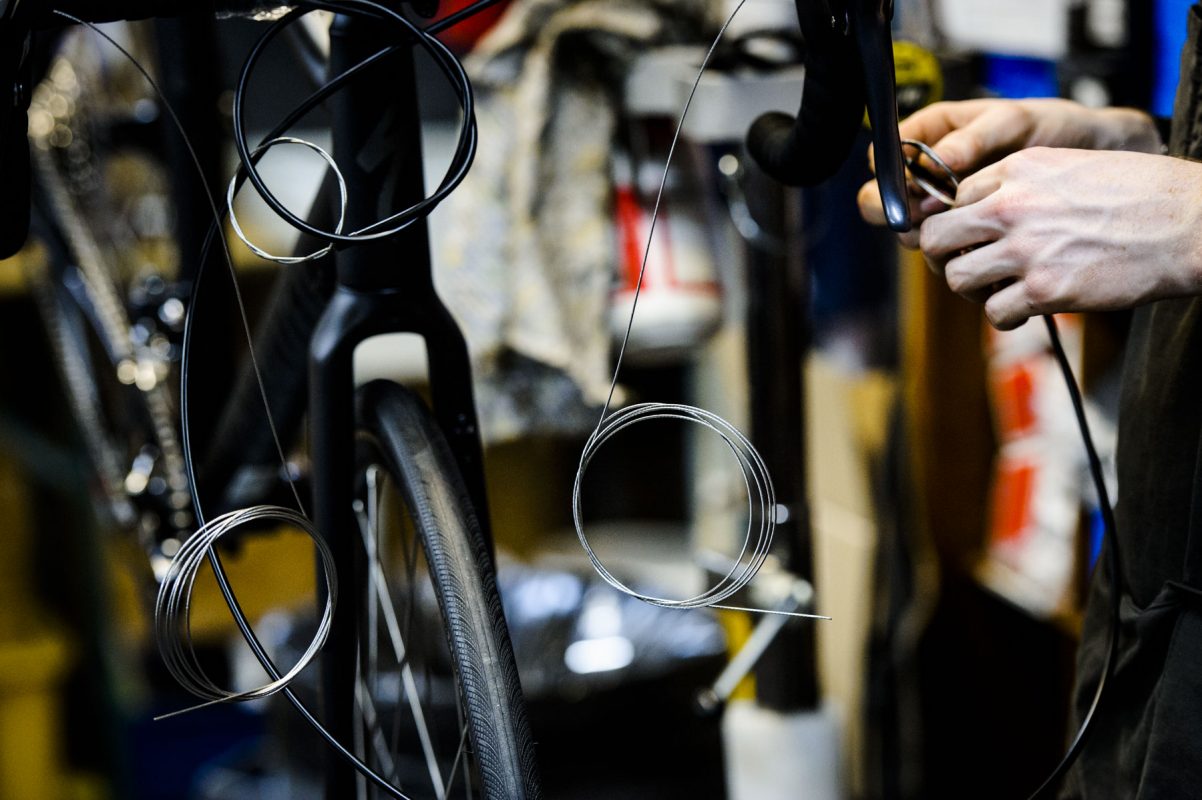 I think what makes Hebden Bridge such a great place to ride is a accessibility to the hills. You can stretch out further afield if you like, but you’re never too far from civilization really. If you want a pint or a sandwich you can get it on your next descent. Great café’s, great pubs and great trails. I always thought, “I’ve gotta work here because it’s got great trails.” And that’s not changed.”

Brew finished it’s time for John to get back to the workshop and get another bike ready to roll out of the door and onto the trails. Hebden Bridge might be blessed with some fantastic riding but it’s also blessed with some equally fantastic folk who are keen to keep you riding. 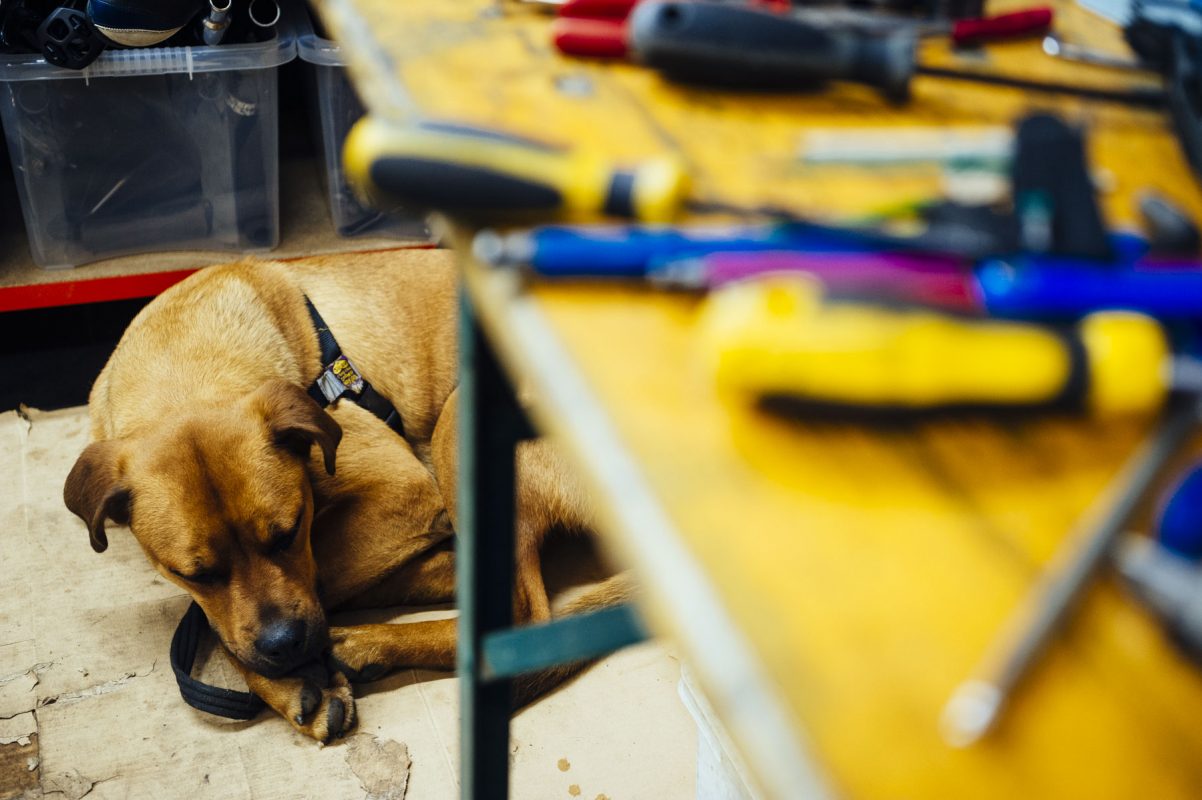