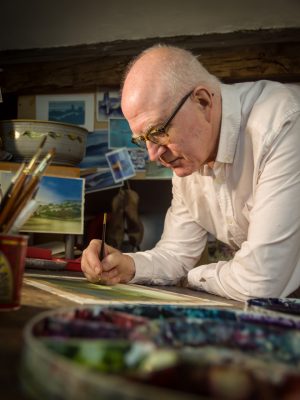 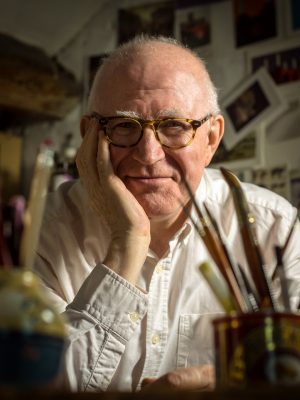 The Working Dales takes a theme which reflects the various aspects of work in the Pennines. Ian Scott Massie saw this exhibition as an opportunity to explore the kind of labour – past and present – which gives this area its unique personality.

There are pictures which focus on work and industry:

Ribblehead Viaduct – a magnificent memorial to the folly of the railway companys’ race to the North
Gibson Mill – an early factory mill in a stunning rural setting, which turned slave-worked American cotton into cloth by using local labourers, each working 72 hours a week.
The Piece Hall – Halifax’s extraordinary handloom-weavers’ market place, reflecting the wealth generated by makers working behind their “Weavers Windows”

And there are pictures representing other aspects of work:

Haworth Parsonage – home to the extraordinary Brontes. Patrick – father, poet and novelist – who changed his name and worked through 7 curate positions to take the incumbency of Haworth, and, in the process, established a creative nest for his amazing children.
Hebden Bridge – from a mill town to an artistic community, now as famous for surviving devastating floods as for the cloth and asbestos it once produced.

The pictures comprise watercolours worked in rich colour on paper (made, appropriately, from cotton rags) and screen prints made through the “suicide” reduction process where pressing ink through a single screen which is gradually blocked out, means there is no turning back where mistakes are made.

Ian Scott Massie was born in Fulham, London in 1952 and grew up in Buckinghamshire close to the childhood home of Paul Nash – an abiding influence in his work and began painting and printmaking professionally while a student in Durham.

He has specialised for some years in single themed exhibitions that have included From William’s Words (Rydal Mount, Ambleside), Tales of the Dales (Wensley and Sedbergh), Places of Pilgrimage (which toured nationally) and Northern Soul. In addition he exhibits at galleries throughout Britain.

His books of poetry, stories, paintings and prints include Under a Northern Sky, Journeys, Places of Pilgrimage, Tales of the Dales, Moor Stories and Northern Soul.

Ian Scott Massie trained as a music teacher and holds a B.Ed. and an M.A. He is a founder of the Masham Arts Festival and of Artison arts and crafts teaching studios and was a semi-finalist in BBC’s Mastermind 2010, answering questions on Paul Nash. In 2012 he was a finalist for the Neo Print Prize and the Flourish Print Award.He is also a founder member of North Yorkshire Printmakers Circle and a regular exhibitor at printmaking exhibitions.

He is currently working on a new book and exhibition inspired by the railway journey from London to Edinburgh. 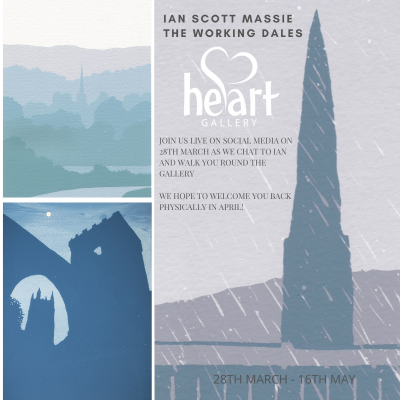