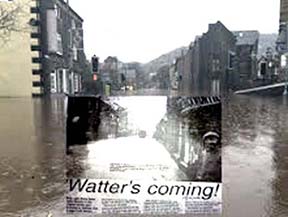 Why are they getting worse? What can we learn from history? Has the Environment Agency learnt anything from history?

Using evidence stretching back to the 14th Century, Nick Wilding compares the 2015 Boxing Day floods and other recent inundations to accounts of floods from previous centuries. In the course of doing so, he discovers some interesting analogies. He traces the course of the tributaries that feed the River Calder and finds that the origins of extreme flood events in the past were in many ways no different to the ones that cause them today. However, he finds that today’s floods have been exacerbated by a range of late 20th Century and 21st Century factors that were not applicable in days gone by.

Nick Wilding is an ex BBC producer, an independent filmmaker and historical researcher, who has made a string of documentaries on a wide range of local Calder Valley subjects and has prepared talks, interspersed with extracts from his films, based upon his recorded interviews with local people and his own research.