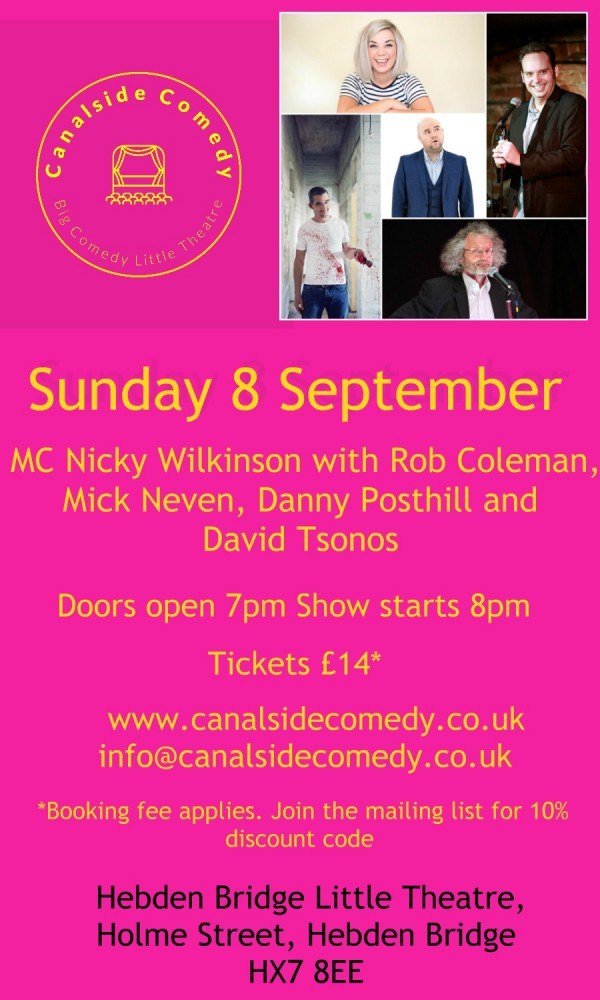 A host of world-famous comics like Michael McIntyre, John Bishop, Jimmy Carr and Lee Evans will be featuring at Canalside Comedy at Hebden Bridge Little Theatre on 8 September. Well

A host of world-famous comics like Michael McIntyre, John Bishop, Jimmy Carr and Lee Evans will be featuring at Canalside Comedy at Hebden Bridge Little Theatre on 8 September. Well that’s possibly a slight misrepresentation! But we do have Danny Posthill, one of the UK’s leading impressionists, who has become renowned for his hilarious take-offs of such individuals – and many others besides.

Danny rose to fame in the 2015 series of Britain’s Got Talent, when he reached the final and produced a stunning performance that fully justified his tag as one of the favourites on the night. What really distinguishes him from other impressionists is the quality of the gags that he incorporates with his mimicry. It has often been said that his set would make a highly impressive stand-up routine in its own right even if it didn’t contain impersonations.

Danny, who is based in Hartlepool, will be joined by two top international acts: Canadian sensation David Tsonos, who is now UK based, and Mick Neven, one of Australia’s busiest comedians, who we have managed to sign up during his latest visit to these shores.

Leicester based Rob Coleman will also be showing us why UK audiences have become so excited by his one-liners and quirky observations, and the evening will hosted by Hull based Nicola Wilkinson, one of the circuit’s most relaxed, charming and sought-after MCs.

Tickets for what is sure to be a really cracking evening are already on sale. Sign up to the Canalside Comedy Newsletter for a 10% discount code and find full details of the acts here.

Tickets cost £14, and can be booked online at https://www.canalsidecomedy.co.uk/